Dogs bark or make other vocalizations during sleep when they dream, so it’s completely normal behavior.

Twitching, jolting, and vocalizing during sleep are pretty common in dogs, especially when they are young. Puppies tend to engage in these types of behaviors more frequently than adults as their brains are undeveloped and they stay in REM (Rapid Eye Movement) sleep for longer.

Barking alongside twitching and other movements during a nap is associated with dreams, which occur most often during REM sleep. Many dogs try to act out their dreams, and that’s why they usually bark, run or twitch while asleep.

Compared to large dogs, both small breeds and puppies have shorter but more regular dreams – around 60 seconds every 10 minutes as opposed to 5-minute long dreams, with roughly an hour of non-dream time between dreaming sequences.

Interestingly, canines dream similarly to humans. They think about everyday experiences, like chasing a squirrel or going for a walk. The reason why we know this is due to a 2001 study by researchers at MIT.

They trained rats to navigate a maze and measured each animals’ brain activity. Once the rats were in the REM phase of sleep, they measured their brain activity again.

It was found that the rats’ brain activity levels while asleep was the same as when they were running through the maze, showing that the rats were dreaming about the maze they’d gone through earlier in the day.

As dogs and cats are more intelligent than rats, researchers concluded that they dream identically to how rats do. Ask the Vet - Why does my puppy bark in their sleep?

"While not particularly common, puppies can bark while asleep. This tends to be a quiet, almost muted bark. These are actually quite sweet little barks!

This occurs when they are dreaming and want to bark in their dream. The barking should be short-lived and won’t occur often""
- Dr Linda Simon MVB MRCVS Puppy barking in sleep – what does it mean?

When puppies bark in their sleep, it simply means they are dreaming. Young dogs process a lot of new experiences each day, which is why they tend to stay in REM sleep longer than adult dogs.

Vocalizations, twitching, sleep running, etc, are also more commonly seen in puppies due to the pons being undeveloped. The pons is a part of the brainstem in humans and other bipeds that plays a special role in REM sleep to stop you from acting out your dreams. Both dogs and humans have similar sleep cycles, with most of their restorative sleep occurring during the evening. However, canines tend to sleep in short bursts throughout the day rather than one long stretch at night.

They usually drift in and out of a deep slumber all within just 20 minutes, as well as awake suddenly after a period of REM sleep.

Humans, on the other hand, are typically a bit groggy and disoriented upon waking from REM sleep. It’s thought that the reason why dogs wake up abruptly and quickly adjust to their surroundings is due to their ancestor’s need to stay alert to threats.

Most dogs’ sleep cycles only last around 45 minutes but they sleep for between 8.5 to 13.5 hours a day. Puppies sleep even longer – approximately 18 to 20 hours daily!

Should I wake a puppy up when they are barking?

Although it can be alarming when a puppy barks in their sleep, especially if it happens all of a sudden, it’s best to let your pooch rest. Vocalizations during a nap are completely normal and nothing to be concerned about.

If you suspect your puppy is having a nightmare, you might be tempted to wake them up to reassure them, but it’s normally better to leave them be.

Waking a dog up suddenly can cause them to act aggressively due to the fight or flight response.

Even the most gentle and friendly pup could bite as an initial reaction after being woken up, which, like the saying goes, is why you should let sleeping dogs lie. Think about when a loud noise or movement abruptly pulls you out of a slumber – you’ll often feel groggy, and disoriented, and may find it difficult to rest properly afterward.

This is a similar sensation for your puppy, which is why they may be grumpy and hostile towards you upon being woken up. Besides, puppies need a lot of sleep to regain their energy levels for growth. Regularly bothering your dog when they’re trying to rest could hinder their development.

While it’s important to let your puppy get plenty of shuteye, if their barking transitions into chasing inanimate objects or bumping into walls, it could point to an REM behavior disorder, which requires treatment from a vet.

This condition can look like a seizure at first, but unlike a fit, dogs suffering from an REM behavior disorder will not be confused or disoriented after they awake. 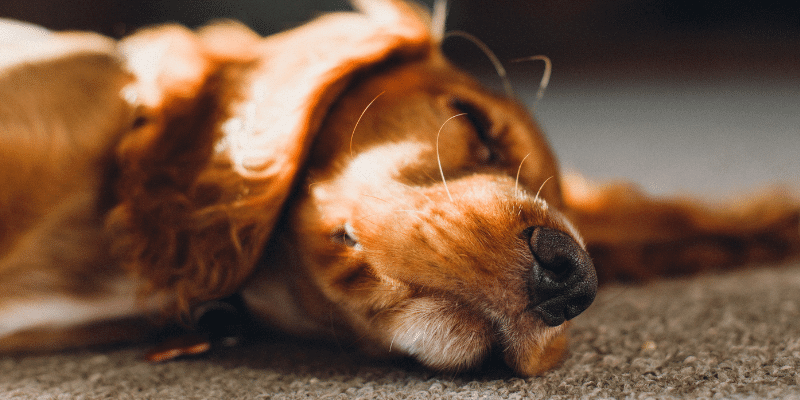 What should you do when your dog barks in their sleep?

If your dog is barking in their sleep, simply let them continue! As mentioned earlier, barking is a normal and natural sign of REM sleep. They’re likely having a pretty vivid dream of something, whether that’s displaying their displeasure of having a bath or trying to catch that pesky squirrel that lives in your backyard.

When puppies bark in their sleep, are they having nightmares?

No one knows for certain what puppies are dreaming of when they are barking in their sleep, but it’s certainly possible that they are imagining something negative. This is especially true if the barking is also accompanied by growling, whining, twitching whiskers, and a tense jaw.

Puppies may also bark when they’re having a good dream, particularly if they start paddling their legs and wagging their tail – perhaps they imagined digging up a tasty bone the size of a house!

What to do if the barking noise is disturbing your own sleep?

A noisy sleeping puppy can be a nuisance if it’s interfering with your own sleep, but there are a few things you can do to ensure everyone in your household gets a good night’s sleep.

Firstly, you could move your puppy’s bed to a room where you and your family members can’t hear your pet’s vocalizations. For instance, if your puppy currently sleeps in your bed upstairs, simply move their basket downstairs – problem solved.

If you’re unable to move your pup’s sleeping quarters, using earplugs is a good idea to block out any sounds your dog makes.

Veterinary prescribed sleeping pills are an option in extreme cases, but most vets are unlikely to prescribe these simply because your puppy is being a bit loud when they’re asleep.

As you probably already know, never give your puppy human medication unless advised to do so by a vet. Most human medications are toxic to dogs and lead to serious health complications, including death.

Puppies spend a large portion of the day asleep as they need lots of rest to grow up big and strong. Most puppies, especially in the first few months of their lives, sleep for between 18 to 20 hours a day.

As your puppy ages, they won’t require as many naps, with dogs at around 6 months old normally only needing roughly 16 hours of sleep each day. Adult dogs sleep far less, usually between 8 to 13.5 hours daily.

Although it might seem worrying at first, a puppy barking in its sleep is completely normal and is just a sign of dreaming. Vocalizations, twitching, and eyelid movements are all-natural effects of REM sleep, so simply let your puppy continue catching up with some zzzs.

That being said, if your puppy’s barking is also accompanied by violent motions like running into walls or attacking inanimate objects, it’s best to get them checked out by a vet as they may be suffering from an REM behavior disorder How to help your puppy sleep through the night Should puppies have water at night? How Much Do Puppies Sleep? 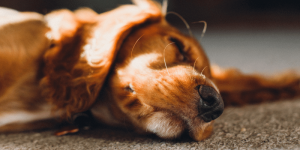