There’s nothing quite as endearing as a puppy sleeping peacefully, but if their slumber is accompanied by rapid breathing, it can certainly be alarming.

If you’ve noticed your puppy breathing fast while asleep, it’s likely that they’re just having a dream or nightmare. However, it’s a good idea to be on the lookout for other possible reasons why your pooch could be breathing heavily during a nap.

That’s why we’ll be going over some of the potential causes of rapid breathing in puppies, as well as a few other helpful tips about puppy sleep. 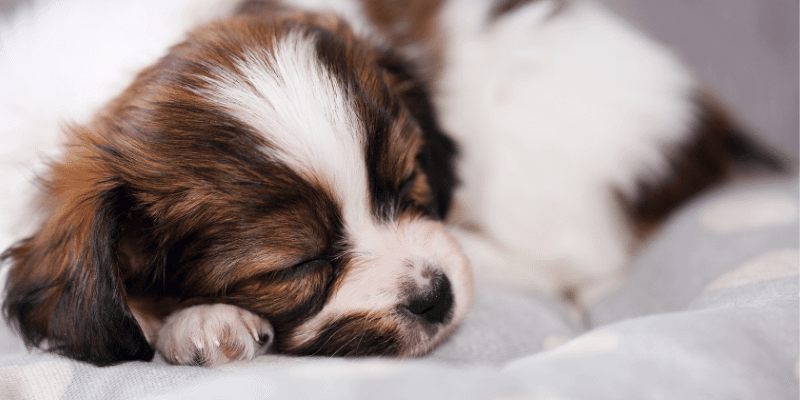 Why is my puppy breathing fast whilst asleep?

There are numerous reasons why your puppy could be breathing fast while sleeping, including though in most cases, it’s simply a normal sign of REM sleep. Just like humans, puppies dream, so it’s not unusual for your pooch to start breathing quickly during the REM (Rapid Eye Movement) stage of sleep. This phase will usually take place around 20 to 30 minutes after your puppy has settled down for a nap, which is normally when your dog’s first dream will begin.

Dogs normally dream of everyday experiences, so it’s highly likely that your puppy is dreaming of you and all the exciting (or even bad) things they’ve encountered recently.

Your puppy’s muscles and eyelids will usually twitch once they’ve entered REM sleep, and they may also produce the occasional soft cry or bark. That’s because your pup’s neurological system will shut down the majority of their motor functions while certain parts of their brain remain awake, allowing your dog to dream without actually moving.

According to the American Kennel Club, puppies twitch more often than adults as their brains are undeveloped.

Most dogs only remain in the REM cycle for between 5 to 20 minutes, at which point they will sink into the NREM (Non-Rapid Eye Movement) phase of sleep. However, puppies tend to stay in REM sleep a little longer than adults, which might be due to all the new experiences they process every day. 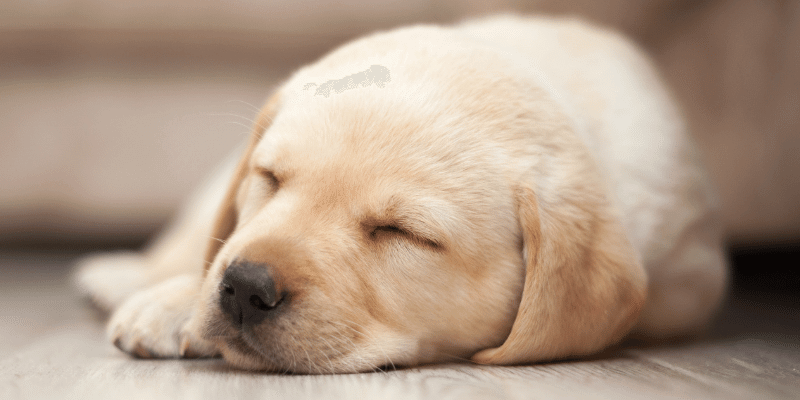 If your puppy is particularly physically active during REM sleep, it could point to a REM sleep behaviour disorder, not dissimilar to sleepwalking. This condition can be dangerous, putting your pooch at risk of slamming into walls or furniture.

It’s a good idea to get your puppy checked out by a veterinarian if you suspect they are suffering from a sleep disorder as they will be able to prescribe treatment to help your pup sleep better. 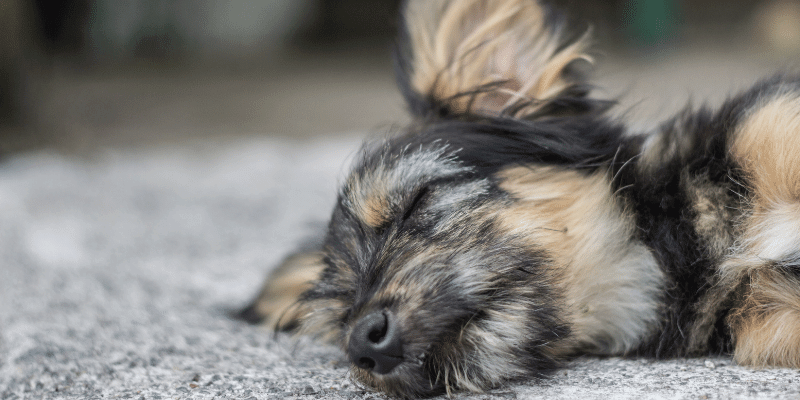 Brachycephalic (short-nosed) breeds like pugs, bulldogs, and boxers normally breathe rapidly, snore, wheeze, and even pant during sleep due to their smaller airways.

That said, the aforementioned behaviours also share many of the same signs as brachycephalic airway syndrome, which can cause symptoms like laboured breathing, high-pitched wheezing, heat intolerance or stress during exercise, regurgitation, choking, gagging, vomiting, and collapse.

It’s important to speak to your vet if your puppy is frequently suffering from breathing problems or the aforementioned symptoms during sleep.

If your puppy has just come back from a big walk or finished a rigorous play session, they may still be cooling down, even while resting. Dogs don’t sweat like humans do, so in order to regulate their body temperature, they pant and breathe quickly.

As mentioned above, puppies pant and breathe quickly to cool themselves down when their body temperature is too high. If your pooch gets too hot, especially on warm days, they are at risk of heatstroke, which can be dangerous.

It’s important to limit your puppy’s time outside during hot weather and make sure they have constant access to fresh, clean water. It’s also a good idea to walk your puppy in the evenings or early mornings when it is cooler.

Some foods are toxic to puppies, including onion, garlic, chocolate, xylitol, macadamia nuts, grapes/raisins, and avocado. If your pup gets their paws onto one of these foods, it can be fatal, even in small quantities.

Lethargy, diarrhoea, vomiting, excessive salivation, collapse, and laboured or rapid breathing are some of the warning signs of food toxicity in dogs. If you suspect your puppy has eaten something dangerous, seek emergency veterinary attention.

If your puppy’s trachea (windpipe) collapses, it can make it extremely difficult for air to get in and out of your puppy’s lungs, causing them to breathe more rapidly or heavily as a result. Another tell-tale symptom of tracheal collapse is a dry cough.

While this condition is more common in senior dogs, it can occur in puppies too. Some breeds, including Yorkshire terriers, chihuahuas, toy poodles, and Pomeranians, are particularly prone to tracheal collapse.

The latter, on the other hand, is linked to conditions and traumas such as obstruction of the airway, secondary diseases (like cancer), anaemia, heartworm, smoke inhalation, pneumonia, near drowning, and hypoproteinemia (a lack of protein in your dog’s blood).

If your puppy displays any of the above signs, book a vet appointment immediately, especially if your puppy’s lips have started to turn blue.

How can I tell if my dog is breathing too fast?

You can tell if your puppy is breathing too fast by counting the number of breaths they take in a minute and comparing it against the average breathing rate for puppies (more on this later on!).

If your puppy is breathing faster than normal while sleeping, it can be a little noisy as they inhale and exhale. Their belly will expand and shrink quickly as they breathe in and out.

Your puppy may also twitch, cry, whine, or even wag their tail depending on whether they are having a bad or good dream!

What is the average amount of puppy breaths per minute?

An easy way to figure out your puppy’s breathing rate is to set a timer for 30 seconds and count the number of breaths they take while sleeping or sitting down. You want to avoid calculating your pup’s breaths per minute when they are exercising as the number will be considerably higher.

One breath represents one rise and fall of your dog’s chest. After the 30 seconds is up, multiply the number by two to get your puppy’s breathing rate.

Alternatively, you can set a timer for 60 seconds and count the number of breaths your pup takes in that timeframe.

Although it can be scary to witness your puppy breathing quickly while sleeping, try not to panic. In most cases, your pooch is simply dreaming or sleeping heavily, particularly if they’re worn out after exercise or a play session!

When should I contact my vet about my puppy’s breathing?

If your puppy’s rapid breathing is higher than the average breathing rate for young dogs or is accompanied by other symptoms like high-pitched whistling, coughing, wheezing, crackling noises, or blue lips, then you should book an appointment with your vet.

Additionally, if your puppy is also breathing rapidly while they are awake, this could be due to an underlying medical condition.

Should you wake a puppy up if it is breathing fast while sleeping?

As long as your puppy’s breathing rate is within the normal range, it’s best to avoid waking up your pooch while they’re trying to catch some z’s.

Puppies need a lot of sleep, more so than adults, and ample rest is vital for healthy development. In addition, waking up your pup suddenly will likely startle them, which may cause them to respond aggressively.

If you need to wake up your pup, such as for a potty break, then use a gentle voice and softly tap them on the rear. This will help them wake up gradually to prevent any negative consequences

As mentioned earlier, young puppies tend to take in more breaths per minute than adult dogs. However, a newborn puppy that is breathing quickly can be a sign that their lungs are not functioning properly.

The average resting breathing rate for puppies is between 15 to 40 breaths per minute. Both small dogs and brachycephalic breeds tend to breathe more rapidly than other canines.

If your 8-week-old puppy is breathing fast while sleeping, check whether they have any other symptoms like coughing, crackling or high-pitched noises, blue lips, and wheezing. The latter can point to an underlying health issue and may require urgent treatment.

A 6-month-old puppy’s breathing rate will still be higher than an adult dog, so make sure it falls within the average healthy range. If it’s considerably higher or you spot your puppy displaying other abnormal symptoms, be sure to book an appointment with your vet.

During REM sleep, it’s not uncommon for puppies to experience dreams or even nightmares. In fact, both young and small dogs dream quicker and more frequently than other canines, having around 60-second dreams every 10 minutes or so.

In comparison, larger dogs have longer dreams, which can last up to 5 minutes. If your puppy is dreaming or having a nightmare, their eyelids and muscles may twitch. Depending on whether the dream is a good or bad one, some dogs will also bark, whimper, and even wag their tail.

What can help my dog sleep?

A safe and warm place to rest such as a soft basket or crate can help your puppy sleep, helping give them a sense of security and a place to retreat to when they’re tired or stressed.

Ensuring your puppy is given adequate exercise and mental stimulation each day can also help wear your dog out so they sleep easier and for longer.

Make sure you keep things calm and quiet for at least an hour before your puppy’s bedtime to help them relax. You should also make sure you take them outside to potty before you tuck them in for the evening so both of you can get a good night’s rest.

Puppies normally sleep for around 18 to 20 hours a day, whereas adults typically nap for between 8 to 13.5 hours daily. However, some breeds will sleep for longer than others.

We have a separate article dedicated to puppy sleep here if you’re interested in learning more about your pooch’s sleeping habits!

While it can be concerning when your puppy breathes rapidly during a nap, it isn’t normally something to worry about, especially if they’re dreaming or exhausted from a walk or play session.

A healthy resting breathing rate for a puppy is between 15 to 40 breaths per minute, so as long as your pup falls within this range, simply let them continue snoozing!

However, if your puppy is regularly experiencing issues with their breathing or exhibits any other abnormal symptoms, make sure you get them checked out by a vet to be on the safe side. 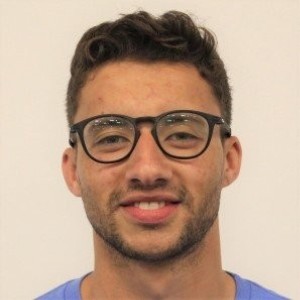 Head of Research and Editorial, Joshua has over 6 years experience as a research consultant in the Finance and Automotive industries. He is a childhood pet owner and dog enthusiast. Every US States favorite dog breed